Green is a calming and regenerating color. Both in the city and countryside, people like to stay in places surrounded by flora and nature. More often a part of this nature is transferred directly to urban architecture thanks to green roofs.

Green is a calming and regenerating color. Both in the city and countryside, people like to stay in places surrounded by flora and nature. More often a part of this nature is transferred directly to urban architecture thanks to green roofs.

At present, in the building design process the usage of green roofs is more and more common due to numerous advantages, both economic and ecological. In the era of global warming, especially the ecological aspect should be of importance.

As a company with over 15 years of experience, we have completed numerous projects in which our scope of work included the implementation of green roofs. With the appropriate experience and experts in this field, we enter the world of green roofs more boldly.

Our expert in the field of green roofs, Maciej Kielak, has extensive experience in that matter. A graduate of the Warsaw University of Life Sciences in the field of gardening, a 10 year member and lecturer at the PSDZ – Polish Green Roofs Association.

For years, green roofs have been his passion and object of interest – initially he was involved in the substrate production technology and coordination of the production process. In 2013 in Switzerland he participated in a good practice course in the field of green roofs. In 2016-2017 on behalf of PSDZ he went to Kazakhstan as part of the know-how transfer and implementation of green roofs, where he was part of the Talan Towers project (4600 sqm of green roofs).

In 2019 he started his adventure in Tectum Group where from the very beginning he has been responsible for projects where green roofs are at least part of the scope of work.

Examples of green areas where Maciej has demonstrated his knowledge are the Warsaw HUB and Browary Warszawskie. 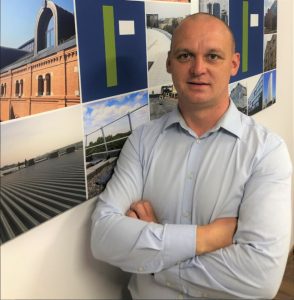 Please find the gallery with other realizations.

The history of green roofs dates back around 2,600 years. Although it is hard to imagine, one of the seven wonders of the ancient world – the Hanging Gardens of Babylon – can be considered as an example of green roofs.

In the past, green roofs had different functions. The history of the Hanging Gardens in Babylon directly indicates an aesthetic function. But in more recent times, at the turn of the 17th and 18th centuries in northern Europe and in the countries of the Mediterranean Basin, green roofs were used for highly functional purposes – due to the prevailing weather conditions in the region of Scandinavia green roofs were supposed to protect from snow and wind, while for example in Turkey from the sun and heat.